I’d never heard of Rob Ickes until hearing a snippet of Road Song on radio a few days ago. (Yes, some people still listen to radio.) Ickes is the long time dobro player for Blue Highway, a contemporary bluegrass group who’s work had also escaped my attention before now. Road Song is Ickes’ fifth solo release on the ResoRevolution label and is strikingly unconventional, at least as far as I’m concerned. 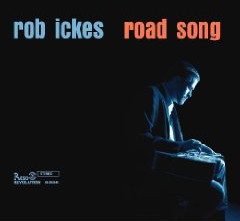 When you think of instruments that might accompany a jazz piano, your mind doesn’t necessarily jump straight to the dobro. But that is Road Song in a nutshell; jazz for dobro and piano. In truth, Michael Alvey’s piano is the accompaniment here. While it is an almost equal collaboration, the dobro is the focus of this album. The only other addition to the mix is the voice of another artist I’d not heard of until now, RobinElla, who sings on three of the ten tunes included here. Her roots are also in country and bluegrass, but she brings a subtle Billie Hollidaylike touch to the ballads on this release. The other seven tunes are strictly dobro and piano, and they work beautifully together.

In fact, listening to this music strongly reminds me of the first collaboration between French jazz pianist Claude Bolling and classical flautist Jean-Pierre Rampal, who’s album Suite for Flute and Jazz Piano Trio broke new musical ground in 1976 and stayed on the top of the charts for two years. While Road Song is not quite that profound, it is still a fresh and innovative treatment of a handful of jazz classics, and even an old Hank Williams song, You Win Again, which includes RobinElla’s vocal. The dobro, in place of guitar, on Wes Montgomery’s classic West Coast Blues, is a little disorienting at first but quickly feels right, and swings just as hard. The same goes for Duke Ellington’s Take The A Train. Rob Ickes clearly knows what he’s doing, no matter the genre.

I happen to be an avid jazz fan, but you don’t have to be to love this music. Something about the unusual juxtaposition of dobro and jazz piano takes it to a place that even non-fans will appreciate. While this is still jazz, to be sure, it’s crossover potential is ripe and it should have broad appeal outside the genre. This album is available as a CD or a download on Amazon, although the CD for this title has a 1 to 3 week shipping window. Do yourself a favor and sample a few tracks online. You’ll probably decide that it’s something you need in your library.