My first recollection of Barbra Streisand is the 1964 release of the Columbia LP, People. That was her fifth album. Her first, the original cast recording of I Can Get It For You Wholesale, was released in 1962. She has been a recording artist for forty-seven years, a performer for fifty, a star for almost all of it, and her voice still has a stunning capacity to move your emotions to wherever she cares to take them. 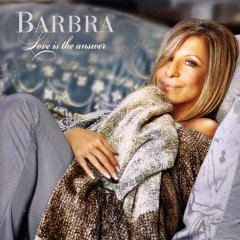 Streisand’s newest release, Love Is The Answer, is a collection of, you guessed it, love songs. After forty-seven years she’s still recording for Columbia, which is now a wholly-owned subsidiary of Sony Corporation, but they’re still smart enough to know that you hold onto franchise artists like Streisand no matter how long they take between new releases, because it’s almost always worth the wait. This album is no exception.

This time out, Streisand collaborated with another of my favorite artists, jazz pianist and singer Diana Krall, who not only played piano on five of the thirteen tracks, but also served as co-producer for this project with Tony Li Puma. Diana recruited her extremely talented backup trio, bass player John Clayton, guitarist Anthony Wilson, and drummer Jeff Hamilton, to serve as the foundation for these sessions. When Ms Krall was not at the piano, that post was ably filled by Tamir Hendelman or Alan Broadbent. Once the tracks were recorded to everyone’s satisfaction with the quartet, legendary arranger Johnny Mandel applied the finishing touches with a deft and delicate arrangement for string orchestra.

The songs are mostly familiar standards from the likes of Jerome Kern, Michel Legrand, Marilyn and Alan Bergman, Jule Styne and others. The backing quartet artfully stays out of Streisand’s way while providing a beautiful canvas for her to work on. Diana Krall’s piano solos are delicate and generous, seeking only to complement, not to distract. And the orchestral arrangements by Johnny Mandel wrap the whole package in a soft, airy gauziness, that is intimate and never smarmy or overdone.

The result is Streisand’s best effort in years, possibly my favorite since 1974’s The Way We Were. At 67, Streisand’s voice doesn’t quite have the angelic purity it did 25 years ago, but it has been augmented by a maturity of understanding, and a feeling that she knows from whence she sings; that these are not just lyrics, but first-hand emotions that have been captured on tape.

These recordings were obviously put together by people who know, and love, what they’re doing. It comes through on every note of every track. This is the perfect CD to put on when you have some time alone, maybe on a cool rainy day, to sit back with a glass of wine or a cup of coffee or a bottle of scotch, and relax. And listen to the warm.

ADDITIONAL NOTE: Since writing this review, I have learned that there is also a two-disc Deluxe Edition of this CD. The second disc is comprised of 12 of the 13 tracks with only the quartet backing Streisand’s vocals, before the orchestra was added to the mix. The 13th track was already piano only accompaniment. I haven’t heard the deluxe version, but since I tend to prefer jazz quartet accompaniment over orchestra, I intend to get it soon. I’ll post an addendum to this review after I’ve had a chance to listen to the quartet version.

I was right. I do like the second CD in the Deluxe Edition better than the first. But that doesn’t surprise me. Because these sessions were initially recorded with the quartet (piano, bass, drums, and guitar) and the orchestra was added after the fact, there is absolutely no difference in the performances. Disc One has an orchestra, Disc Two does not. The vocals and the instrumental quartet are the same.

So it’s entirely a matter of taste. If, like me, you prefer trio and quartet jazz, you will appreciate the second disc more. If you like orchestral backgrounds, you’ll prefer the second disc. But there is absolutely no reason to buy the Deluxe Edition if you prefer the orchestra. You can buy the standard version for five or six bucks less, and have exactly what you want.