I have excerpted Bob Gendron’s excellent and thorough review of the upcoming EMI/Capitol reissue of the Beatles catalogue from his column at TONEAudio. His article has me very excited to hear all of this old and familiar material again through the ears of 21st century mastering technology. The remastering engineers at Apple Records have not added anything to the mix, nor taken anything away. They have allowed us, for the very first time, to hear what has always been there but has been inaccessible with previous mastering and playback technologies. If you’re a Beatles fan, then September 9, 2009 is a day to look forward to. 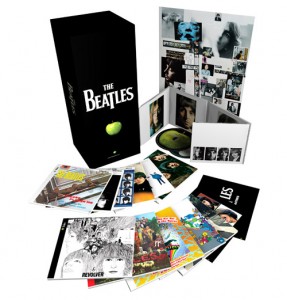 The cost of owning a good-sounding Beatles record just got significantly cheaper. Arriving 22 years after the band’s catalog was originally issued on compact disc, Capitol’s long-awaited remasters of the Fab Four’s 12 studio albums, Magical Mystery Tour, and the Past Masters collections—as well as the label’s limited-edition Beatles in Mono box set, comprising 10 studio records in their original mono mixes plus the Past Masters set—sound, as a whole, uniformly fantastic. It’s clear that the team of engineers responsible for the four-year project ensured that the world’s most important and famous pop catalog finally received the care it’s always deserved no matter what mix is heard. While hardcore fans will want both the mono and stereo editions, the general populace is almost guaranteed to be content with the widely available stereo versions. Not that everyone will be happy. All accomplishments aside, it’s a foregone conclusion that no matter what the results indicate, certain parties will complain, criticize, and nitpick. Those curmudgeonly detractors and obsessive freaks are better off waiting for the second coming of Christ; rumor is that the payoff will be a lot better.

For the majority of listeners, however, any temptation to spend hundreds of dollars on rare vinyl pressings should erode as they become acclimated to what often resembles hearing familiar records for the very first time. Such are the near-miraculous improvements in the key areas of information retrieval, hidden details, palpable physicality, expanded midrange, transient presence, and frequency response. As expected, the mono and stereo editions have their share of positives and negatives. Yet the benefits of the mono mixes reign supreme through Revolver, no surprise given that original producer George Martin intended for the Beatles’ records to be enjoyed in mono. With Sgt. Pepper’s Lonely Hearts Club Band, the tide begins to turn, yet efforts like The Beatles (a.k.a. The White Album) remain toss-ups for myriad reasons.

Since the original post, I have had the opportunity to listen to the mono box set, as well as most of the stereo remasters. In my opinion, up through “Rubber Soul” everything, almost without exception, sounds better in mono. The Capitol stereo releases were never actually stereo anyway. All vocals were on one channel and the music on the other, because they were recorded on two-track equipment, and intended to be mixed only for mono by EMI in England.

George Martin, who signed The Beatles to Polydor Records (an EMI label), and produced all their recordings, recorded for what he called “high impact mono.” By keeping the vocals and instruments on separate tracks, he felt this gave him maximum control over how “out front” the vocals were in relationship to the music. EMI, at the time, reserved stereo recording for classical music only, but Capitol was at the beginning of their “Full Dimensional Stereo” period, and would not issue any new release without both a mono and a stereo version. So, we got what we got. The resulting stereo versions, released only in America, were anything but “full dimensional.”

Later, as The Beatles began recording on four-track equipment, they were still recording for mono, but the attempts at stereo mixes got a little better. So beginning with “Revolver” I recommend having both the mono and stereo versions. You can then pick which songs really sound better, and choose that one for your iTunes library. This will take you a little time, but is worth the trouble, I think.

The mono box set does not include the “Yellow Submarine” “Abbey Road” or “Let It Be” CDs as they were originally recorded for stereo. “Yellow Submarine” is not worth buying separately, in my opinion, as there are no really good songs on it, and the title song also appears on the “Revolver” CD.

So, the mono set ends with “The White Album” and “Mono Masters” (a two-disc album which was originally released as “Past Masters”). You may recall that “Past Masters” was a collection of all the songs that were released only as “singles” in Great Britain, and were not included on any album there. You may want to pick this one up in stereo as well, though most of the songs on it sound better in mono. Interestingly, the mono discs of “Help” and “Rubber Soul” also include the 1965 stereo mix on the same disc, so this makes comparison very easy.

One last caveat – Some people just don’t like the sound of mono. It’s dated, and old-fashioned sounding, but the first half of The Beatles catalogue sounds much better in mono. You’ll still get the new dynamic range of the remasters. Every instrument really pops out, as well as each vocal within each harmony. It truly is amazing how much better these new discs sound than the 1987 releases, which are the masters we’ve been listening to since they were first released to CD. And you’ll probably realize how bad the fake stereo you grew up with really sounded. If not, the stereo box set is also available, and includes all of the albums.

If you’re a Beatles fan, and you still listen to them regularly, you’ll find it well worth the cost of updating your library with these newly mastered recordings. If you haven’t listened in a while, and are just curious, start with “Abbey Road.” You will be surprised by what you hear, and may find The Beatles sprinkled into your playlists all over again.