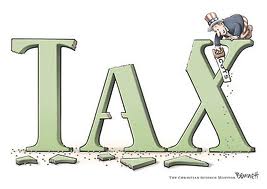 A dear friend sent me this article, with the following observations. “The Republicans run a better theater – told us LOUDLY in 2003 we were getting a refund, let us anticipate it for 3 or 4 months, made sure when it came that it had George W. Bush’s name written all over it so we knew exactly who was giving it to us – and it arrived as a timely reminder just before the 2004 election.

The Democrats are so stupid that no one even heard a press conference about this tax cut. The Democrats just don’t get the show business of politics anymore, and as a result, for all the good they might do, they will continue to be marginalized.”

From Obama, the Tax Cut Nobody Heard Of

HUNTERSVILLE, N.C. — What if a president cut Americans’ income taxes by $116 billion and nobody noticed?

It is not a rhetorical question. At Pig Pickin’ and Politickin’, a barbecue-fed rally organized here last week by a Republican women’s club, a half-dozen guests were asked by a reporter what had happened to their taxes since President Obama took office.

“Federal and state have both gone up,” said Bob Paratore, 59, from nearby Charlotte, echoing the comments of others.

After further prodding — including a reminder that a provision of the stimulus bill had cut taxes for 95 percent of working families by changing withholding rates — Mr. Paratore’s memory was jogged.

“You’re right, you’re right,” he said. “I’ll be honest with you: it was so subtle that personally, I didn’t notice it.”

In a troubling sign for Democrats as they head into the midterm elections, their signature tax cut of the past two years, which decreased income taxes by up to $400 a year for individuals and $800 for married couples, has gone largely unnoticed.

In a New York Times/CBS News Poll last month, fewer than one in 10 respondents knew that the Obama administration had lowered taxes for most Americans. Half of those polled said they thought that their taxes had stayed the same, a third thought that their taxes had gone up, and about a tenth said they did not know. As Thom Tillis, a Republican state representative, put it as the dinner wound down here, “This was the tax cut that fell in the woods — nobody heard it.”

Actually, the tax cut was, by design, hard to notice. Faced with evidence that people were more likely to save than spend the tax rebate checks they received during the Bush administration, the Obama administration decided to take a different tack: it arranged for less tax money to be withheld from people’s paychecks.

They reasoned that people would be more likely to spend a small, recurring extra bit of money that they might not even notice, and that the quicker the money was spent, the faster it would cycle through the economy.

Economists are still measuring how stimulative the tax cut was. But the hard-to-notice part has succeeded wildly. In a recent interview, President Obama said that structuring the tax cuts so that a little more money showed up regularly in people’s paychecks “was the right thing to do economically, but politically it meant that nobody knew that they were getting a tax cut.”

There are plenty of explanations as to why many taxpayers did not feel richer when the cuts kicked in, giving typical families an extra $65 a month. Some people were making less money to begin with, as businesses cut back. Others saw their take-home pay shrink as the amounts deducted for health insurance rose.

And taxpayers in more than 30 states saw their state taxes rise, according to the Center on Budget and Policy Priorities.

That is what happened here in North Carolina. The Treasury Department estimated that the federal tax cut would put $1.7 billion back in the hands of North Carolina taxpayers this year. Last year, though, North Carolina, facing a large budget shortfall, raised a variety of state taxes by roughly a billion dollars.

“It was a wash,” said Mr. Tillis, the state representative.

The guests at the Pig Pickin’ rally here could rattle off the names of the House speaker and the Senate majority leader with ease, if with disdain, and were up on many of the political controversies of the day. They studied the campaign fliers at their tables, and pocketed the 1.5-ounce jars of strawberry preserves with special labels urging them to vote for Judge Bill Constangy for Superior Court (“Preserving Justice,” the labels read).

Many volunteered that they thought the Bush tax cuts should be extended for all taxpayers, even for the wealthy ones whom Mr. Obama would like to exclude. But few had heard that there had also been Obama tax cuts — which will also expire next year unless extended, but have generated far less public debate.

Bob Deaton, 73, who wore a “Fair Tax” baseball cap, was surprised to hear that there were tax cuts in the $787 billion stimulus bill, which was wildly unpopular with many at the rally even though roughly a third of it was in the form of tax cuts.

Ron Julian, 50, a Huntersville town commissioner, said he thought his taxes had gone up under Mr. Obama. And Mr. Paratore, a former Hearst executive, said he might have noticed the tax cuts if his paycheck had jumped more in the weeks before he retired last year: “I couldn’t even tell you what it was, to be honest with you.”

The Obama administration wants to extend the little-noticed tax cut next year. Jason Furman, the deputy director of the National Economic Council, said the administration still believes that changing the withholdings was a more effective form of stimulus than sending out rebate checks would have been.

“In retrospect, we think that judgment was right,” he said. “It’s harder to predict what’s good for politics. Ultimately, the best thing for politics is going to be helping the economy.”

But at least one prominent economist is questioning whether the method really was more effective. Joel B. Slemrod, a professor of economics at the University of Michigan, analyzed consumer surveys after the last rebate checks were sent out in 2008 by the Bush administration, and after this tax cut, called Making Work Pay, went into effect under the Obama administration.

Mr. Slemrod said it was not unheard of for voters to miss tax cuts. Just a few years after a 1986 overhaul of the tax system made significant cuts to most people’s taxes, he said, a survey asked people what had happened to their taxes. “Most people didn’t answer that they went down,” he said.