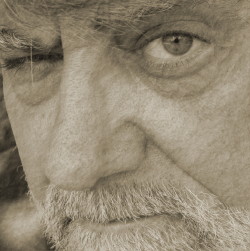 My name is David Michael Perkins, and I was born in Fort Worth, Texas in 1949. I graduated from Azle High School in 1967 and attended Sul Ross State University in Alpine, Texas until 1969, when I entered the U.S. Air Force. After six months of basic training and technical school, I served one year in Vietnam, and about two and a half years in San Antonio, Texas, where I was honorably discharged in 1973.

I moved to Los Angeles, California in 1975, where I’ve lived since, working mostly in the film and television post-production industry. I’m married, since 1985, and have one son who was born in 1991. I’ve dallied in writing for television and film, essays and articles, and most recently for the web. I’m an unrepentant liberal who thinks we have an obligation to look after one another. But don’t ask me to help right now, ’cause I’m pretty busy.

This site is a work-in-progress, so I don’t need to hear any crap about how bad it looks, or how little there is to see here unless you’re an accomplished webmaster, and you’re willing to work for free.

If any of this sounds like the David Perkins you’re looking for, then you’ve probably found me. If I owe you money, I’m sorry. I don’t have any. If you owe me money, keep it. I’ve apparently forgotten about it. And if I touched your wife in an unsavory manner, I apologize. I was drunk. But if you’re an old friend who just wants to have a beer and talk about better times, then by all means drop me a line, grab a six pack, and come on by. I’m always happy to see anyone who’s not pissed off about something.