I was completely unprepared. I was absolutely clueless. Oh, I knew about the changes everyone talks about. I went to six weeks of parenting classes for expectant mothers and fathers, so I knew about the cabinets and the electrical outlets. I knew about the table corners, and the cleaning products, and the insecticides. I learned about care and feeding, and the changes that are better approached with the aid of a breathing apparatus. Hell, I could even perform infant CPR. Probably.

External. All that stuff is external. Everyone tries to prepare you for the external stuff, like that’s where the big changes are. But there are changes they don’t tell you about in parenting class. Sure, your physical world will never be the same, but that’s small potatoes compared to the internal upheaval that’s coming. The convulsion 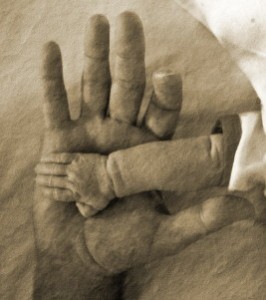 that takes everything you ever felt or knew, or thought you knew, puts it in a bag, shakes it up and dumps it back out again. Dumps it back out in a pile that you don’t recognize. It makes you question every opinion, every value, every truth you had arrived at, and thought to be firmly held. Fatherhood. The great humbler.

A couple of years before my son was born, I sat in the living room of two friends who had recently given birth to their second child. As the father sat rocking his infant son, who was asleep on his chest, he looked knowingly at me and smiled. “It don’t git no better’n nis,” he said. (It’s okay, he’s from Virginia.) I smiled back. “I know,” I replied, nodding. But I didn’t know. I couldn’t have known.

Maybe we’re not supposed to get it. Maybe it would upset some kind of natural balance. Or, maybe I project too much when I assume that my own dim-witted stroll through life is the same one that everyone else takes. But, I don’t think so. I might concede, under duress, that women have a better shot at understanding all this a little sooner than men. Especially after a few months of raging hormones, and that maternal instinct thing starting to assert itself. But, even so, I don’t think any but the most sensitive and insightful among us can conceive of the depth and breadth of love that parents feel for their children until we ourselves become parents. Then, if you’re paying attention at all, it clicks.

You get it. In the same instant that your whole world is turned on its ear, and everything is suddenly frightening and confusing, that is the one matter of clarity. This awareness doesn’t make your parents any less a pain in the ass, but it does make some of the things they did comprehensible.

At night, when I stand over my son’s bed and watch him sleep, I’m sure my feelings are the same as those felt by fathers since the beginning of time. But somehow, they feel unique. Particular to me and my son. Egocentricity seems to allow for this. He’s five years old now, and I still lay my hand on his back to be sure he is breathing. I look at his beautiful face and wonder if he will grow up to be the next Jonas Salk, or Cal Ripken, Jr. or John Dillinger. Somehow, you never consider anything in between. I wonder what kind of world I will hand to him, and if he’ll be willing to accept it.

It’s especially at these times, when it’s just the two of us, that I most question my own beliefs and values. My truths. The ones that were so violently shaken when he came into the world. Are they honorable? Are they true? Is it correct, or even fair, that I pass them on to him? I never really come to any conclusions. In fact, I’ve grown grudgingly tolerant of the idea that there really aren’t any. But I’ve also come to realize that asking myself the questions will likely be a lifelong exercise. Maybe even one of the most important things I do.

Sometimes, when I watch him sleep, a peculiar swell of emotion rushes up through my chest, like an anxiety attack, only good. It usually turns out to be some kind of condensation, which manages to escape through my eyes. I bend down to smell his hair, which is always fresh with the scent of baby shampoo, and I kiss him goodnight. I whisper in his ear, “I love you.” He doesn’t open his eyes. He doesn’t wake, or even stir. But sometimes, from within his sleep, he whispers back, “I love you too, Daddy.”

I wish my son had come soon enough to meet my father. I would like for them to have known each other. Almost as importantly, I would like to have asked my dad some questions. Did he stand over my bed and watch me sleep? Did he lay his hand on my back? Did becoming a father fill him with the same fear; the same joy? And did he have this condensation thing in his chest? Mostly, I would just like to tell him that I get it. Now.

The changes are too many to count. Maybe people talk about the external stuff because it occupies so much of their day to day attention. Or, maybe because it’s just easier to put into words. Besides, they could never cover it all in a six week parenting class. Your life is forever and irrevocably transposed. It will be years before you again see the inside of a movie theatre, or a nightclub, or a restaurant without orange vinyl booths. You will choose a dining establishment for its current action figure, rather than its cuisine. Watching television, without simultaneously playing with gargoyles and rubber dinosaurs, will become a fond memory. And if your house catches on fire in the middle of the night, you can no longer just jump out the window and run away.

Fatherhood. It’s a lot of things. Some frightening, some wonderful beyond my ability to express. Is it a fair trade? Clearly, not for everyone. But I would challenge any man, however impenetrable he may see himself, to hear a sleeping child whisper, “I love you too, Daddy,” and then disagree with the wise man who once said, “It don’t git no better’n nis.”